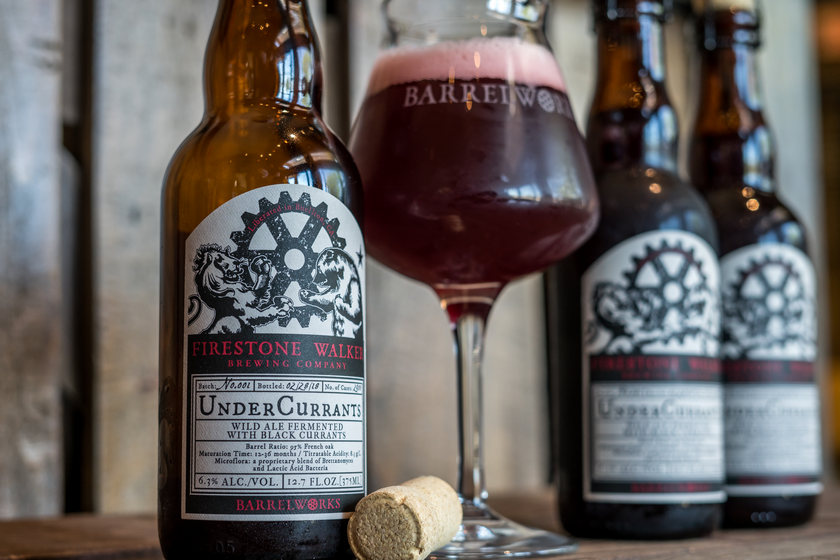 (Buellton, CA) – From the fields of Poland to the coast of California comes UnderCurrants — an inaugural cross-continental wild beer from Firestone Walker’s Barrelworks.

“We have been toying around with the idea of a currant-infused beer for several years now,” said Barrelworks’ Master Blender Jim Crooks. “We finally decided to strike when we were able to score beautiful whole black currants from a farmer in Poland, which is renowned as one of the world’s finest currant-growing regions.”

The result is a wildly flavorful beer that is bursting with rich currant goodness.

This inaugural release of UnderCurrants will begin rolling out next week to all Firestone Walker markets in limited draft and 375-ml bottle formats. It is the second of five bottled Barrelworks wild ale releases slated for 2018.

After hand harvesting in Poland, the whole black currants were treated with IQF (individually quick frozen) technology to perfectly preserve their fresh aromas and flavors, then shipped to California and delivered to Barrelworks last summer.

“We knew that fresh fruit flavors were critical to the success of this beer, and this amazing IQF technology made it possible,” Crooks said.

Crooks and his team blended the currants with 150 barrels of Agrestic Ale (Barrelworks’ wild iteration of Firestone Walker’s signature DBA pale ale) that had been aging for 12 to 48 months. The currant-infused Agrestic blend was then inoculated with Barrelworks’ proprietary Brettanomyces yeast and aged for an additional four months in oak foeders.

Lastly, more Agrestic Ale was added back into the blend to achieve an optimal balance of currant flavor and texture. “The intensity of the currant flavors was out of this world,” Crooks said. “By cutting more Agrestic into the final blend, we were able to dial everything into perfect balance.”

An Homage to A Classic

UnderCurrants also pays homage to the iconic Consecration ale made by Russian River Brewing Company, with whom Firestone Walker has collaborated many times over the years. In fact, Barrelworks beers are bottled with a bottling line inherited from Russian River.

“Consecration sets the standard for currant-infused beers, and UnderCurrants now becomes our own contribution to the style,” said Jeffers Richardson, director of Barrelworks. “We think it will blow some minds.”

Change Location
To find awesome listings near you!